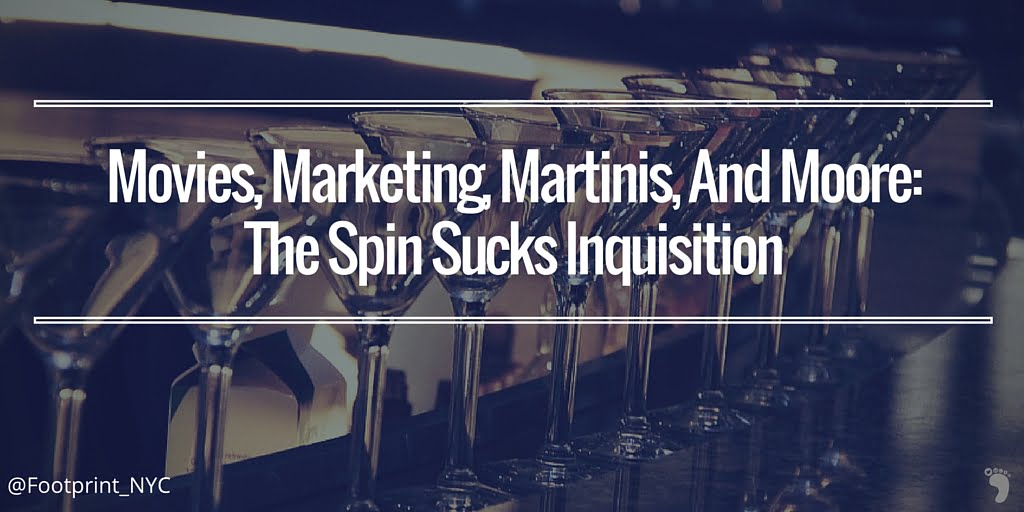 Footprint Digital’s CEO and Co-Founder Robert Moore found himself in the hot seat on The Spin Sucks Inquisition with Gini Dietrich, founder and CEO of Arment Dietrich, author, and lead blogger at Spin Sucks.

The Spin Sucks Inquisition invites some of the most talented, entertaining, and accomplished marketing, communications, and PR professionals from all over the world.

With a little help from Rudolph the Red-Nosed Reindeer and Director of Operations at Spin Sucks Laura Petrolino, Moore landed the coveted spot after a long campaign to connect with the highly respected Chicago PR pro.

But this is no ordinary Q&A interview. This is an inquisition, where Gini digs deep into the minds and hearts of her subjects.

So what do we find out about Footprint’s lead strategist?

This life-long entrepreneur, filmmaker, and self-proclaimed “interesting cat” has his paws in several ventures. In addition to being CEO and Co-Founder of Footprint Digital, Moore is Executive Producer of Behind The Velvet Rope, a celebrity interview show based in New York City featuring the biggest names in film, TV, fashion, music, sports, and theater.

He is Co-Founder of oneQube, a social media listening technology and new media company. Moore is also fueling his filmmaking passion by starting production on a project that he wrote with his son, who is attending film school later this fall.

Understanding how fast the marketspace moves, Moore is looking forward to expanding Footprint Digital to provide his clients the best-in-class service offerings to meet all their digital marketing needs.

He also understands the value of a great dirty martini, karaoke nights, and Netflix binges with his sons…and the value of doing them all at the same time:)

Check out more of Robert’s marketing insights, his thoughts on the future of live streaming video, and the three songs he knows every word to.

This video originally appeared on the SpinSuck blog.

What three songs do you know every word to?

We’d love to hear from you!

Get bi-weekly digital branding and marketing tips delivered to your inbox.

Thank You For Subscribing!